Historically FFLAG has, since 1993, been a charity dedicated to supporting parents and their lesbian, gay and bisexual daughters and sons. We have mostly been parents of LGB children ourselves and, as such, have felt most able to support those whose experiences are similar to our own. But times change.

Recent LGBT legislation in the UK such as the Equality Act 2010 and the legalisation of same-sex marriages in England, Wales and Scotland in 2014 have been very welcome. Also, society in general and younger generations in particular have become more inclusive in their understanding of differing sexual orientation. However, along with these changes, we have seen a substantial increase in the number of young people being referred to support services for help with transgender issues.

Many of the enquiries we currently receive from parents are from those with trans youngsters. The difficulties trans youngsters face are not the same as those for LGB youngsters (who face issues relating to their sexuality), since theirs relate to their gender identity. However, the issues may indeed cross the boundaries of gender and sexuality which our society has so rigidly enforced. General understanding of trans issues in our society is still limited and waiting times for specialist support are very long. We therefore want to extend our remit to include support for family and friends of trans people. FFLAG has no paid staff and we are just eight trustees but we are working in partnership with people in the trans community, their families and other organisations to build our capacity. Local groups which are affiliated with us are becoming trans inclusive to varying degrees.

We will continue to:

We are still developing our trans support and are not now setting ourselves up as the experts but rather are looking to those who have personally faced these situations themselves to work with us, for the sake of those who are looking for help now.

If you would like to be a part of the work that FFLAG is doing, please contact us.

Adam documents his journey in the hope of making others realise that it’s okay not to be a heterosexual cisgender person.

“I’ve had a Tumblr blog for the past few years but wanted to try and progress onto something more substantial. In 2016 you wouldn’t think it’s necessary to explain to people what being transgender means, and that it’s not something that will completely ruin your chance of having a long happy life, but it seems that there’s still a bit of work to do on understanding and acceptance. Hopefully I can shed some light on that and show that you can in fact function as a human-being, have friends, relationships, a family, a job and serve as a decent member of society as a trans person.” 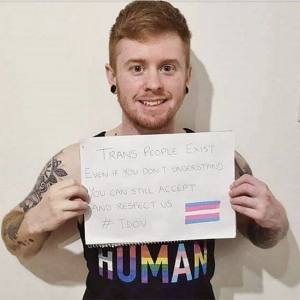 Links to Other Support

The trustees have no control over the nature, content and availability of the sites you are able to link with through this website.

Organisations affiliated to FFLAG are expected to ensure that their website and activities support our Vision and are consistent with our values. To the best of the trustees’ knowledge and belief our affiliates comply with this requirement and are trustworthy organisations that observe appropriate standards.

The trustees give notice that the inclusion of links to organisations listed on this website is not an endorsement of their activities and services, nor of any views expressed by them.

If you do not want that we track your visist to our site you can disable tracking in your browser here: